84 sculptures have been put on top of both the This Morning studios and ITV’s headquarters buildings to represent the men who take their lives every week.

The charity CALM (Campaign Against Living Miserably) want to raise awareness of the fact that 84 men take their own lives every week.

Every week 84 men in the UK takes their own life, leaving behind grieving families and friends.

The sculptures are part of a campaign by CALM to start a conversation about male suicide and help promote suicide prevention and bereavement support.

It is difficult to walk the pass 84  sculptures standing on the top of the This Morning studios and ITV’s headquarters on London’s South Bank without noticing.

Each sculpture is of a man who took their own life their family and friend worked with American artist, Mark Jenkins, and his collaborator Sandra Fernandez to create each figure.

They are all of of different races and ages, despite this they all have something in common that they tried to keep their struggles from those who close to them. 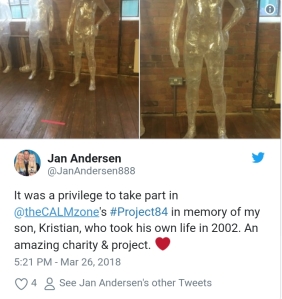 This Project is also accompanied by the signing of a petition called make suicide prevention and support a government minister’s responsibility.

The petition started by Mathew Smith, who lost his brother to suicide, has more than 118,800 signatures.

CALM’s Chief Executive Simon Gunning said: “Project 84 is all about making the scale of the situation very clear to everyone who seen the sculptures and we hope that by working with the families and friends of real men who have taken their lives, we can face the enormous issue of suicide together and strive for change.”