Can Bisexual lightning being portrayed as a new cinematic spectacle be problematic? 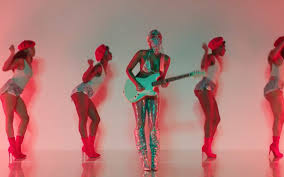 Viewers of TV and films have for a while debated on how homosexuality is being shown on our screens.

After Janelle Monáe’s video for her single “make me feel” was released bisexual lightning has taken the internet by storm, reason being she is seen enamored in purple, pink and blue  the representation of the bisexual flag as she flirts with both a male and female in a club.

The bisexual flag though it is appealing and  meant to send its messages it has deepened the chance for narrowed ideas that bisexuality is a passing phase or experiment. Which is obviously an issue as it increases such mistaken beliefs about bisexuality

This may or may not be a trend – use of colours to intimate #bisexual characters in movies. https://t.co/njIzVNRr7L

An artiste like Demi Lovato who has openly talked about her sexuality has every right to use the bisexual lighting as a representation but when its used in other aspects the seriousness of it including its messages are lost.

Bisexual lightning, which signifies the LGBT community with its flags, first became known in 2014 when a scene in Sherlock where the colours of blue and pink that makes you wonder about Dr. John Watson’s concealed yearning. In 2016 after the movie Moonlight the term bisexual lighting raised a lot of controversy and a lot of comments addressed how it was used throughout most of the movie.

Is bisexual lightning being used to portray the beautiful community or is it being used as a chance for criticism on the LGBT community?