The Mayor of London, Sadiq Khan has unveiled the first statue of a woman in Parliament square, the monument is to Millicent Fawcett, the Suffragist leader.

Millicent Fawcett united the Suffragist movement under the National Union of Women’s Suffrage Societies in 1897 after her former leader, Lydia Becker died. She was instrumental in the 1918 representation of the people act, which gave voting rights to female property owners over 30.

The statue would be the first and only statue of a female in Parliament’s square, the Mayor said “when you think of the great people in Parliament Square and when you realise that not one of them is a woman, it sort of begs the question, are we saying there haven’t been incredible women in the past?”

Jeremy Corbyn, the labour leader and Prime Minister Theresa May as well as several other leading political figures such as Sajid Javid, the communities secretary.

Theresa made a short speech at the unveiling “I would not be here today as Prime Minister, no female MPs would have taken their seats in Parliament, none of us would have the rights and protections we now enjoy, were it not for Dame Millicent Garrett Fawcett.”

The monument was built because of a campaign led by Caroline Criado Perez, the campaign had a petition with 85,000 signatures and was publicly endorsed by the mayor.

Caroline said “When I went for a run in Parliament Square two years ago and first noticed that all the statues there were of men I could never have imagined quite how perfectly the dream would eventually be realised”. 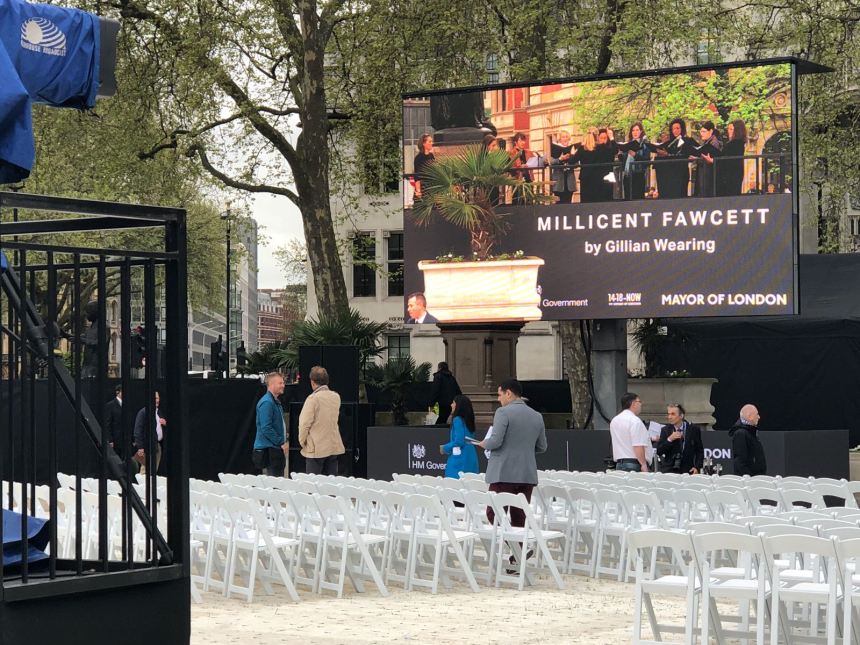 The statue was commissioned to commemorate 100 years since the 1918 act with 14-18 NOW, Firsite and Iniva. The Mayor asked Turner prize winner, Gillian Wearing OBE to make the statue, the statue itself was funded by the £5 million Centenary fund, this makes it also the first statue made by a woman in the square.

Gillian said “I hope those viewing the work will be able to appreciate this along with being able to celebrate Millicent Fawcett along with all the other suffrage supporters and activists also honoured.”

To celebrate 100 years since women gained voting rights, the government has used a £5 million centenary fund to help projects that educate youngsters and raise awareness about this event in history. 600,000 has been given out to far to projects across the country.