Posted on April 27, 2018 by Kaya Robyn - Arts and culture editor Leave a comment

The streets of Brixton are coming alive on the 28th of April, with a new day and night 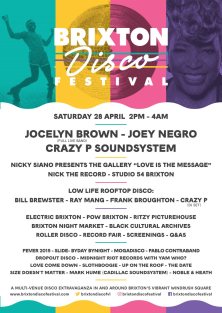 festival celebrating 40 years of disco in some of Brixton’s most renowned venues.

The Brixton disco festival is set to take place in venues surrounding Brixton’s iconic wind rush square the electric Brixton is going to be home to hundreds of ravers until 4am with live performances and DJ sets. The Ritzy picture house, the black cultural archives and POW club and rooftop bar will be hosting both day and night events to celebrate disco music and culture. Brixton’s night market will have dozens of stalls providing food and refreshment’s in wind rush square along with an all-day roller disco!

Disco music first emerged in the 1970s, it brought communities of all ages and ethnicity’s together to dance, listen to music and have fun. Disco music was around for years in clubs and parties before it became mainstream thanks to shows like soul train (a dance show aired in 1971) and artists like the Supremes, Stevie wonder and donna summers. Disco music in many ways changed music forever as it united people, gave us the world’s first explicit songs and openly gay and coloured musicians on the radio. In retrospect disco music liberated and empowered generations through uplifting songs like “we are family” and “I will survive” as well as it shining a light on social issues such as sexuality and racism.

Disco music was there through the times- it was present at studio 54 home to some of the world’s most outrageous fashion, art and people, it was there to unite races and create social awareness and now in the 21st century disco music is still prominent in clubs, music and fashion. So it’s no surprise that disco music is being celebrated and remembered for what it once was by bringing a thousand ravers together in London’s cultural centre Brixton.