The Conservatives will probably dodge “utter disaster” despite Labour’s swing.

As of the 26th April, the voting intentions for London are 29% Conservative, 51% Labour and 11% Liberal Democrat, though Labour will be making major gains according to most analysts there will be a few boroughs that will be tough for Labour to break through.

Westminster and Wandsworth which have been Conservative strongholds for decades, if the current trend is correct then there would be a modest swing of about 7 points towards Labour. 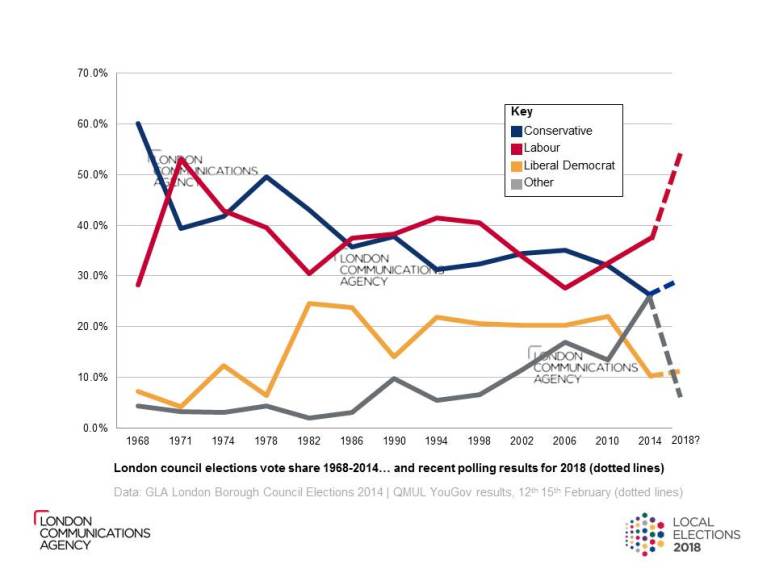 This was less than what was originally expected but still very bitter loss for the Conservatives, however considering the trend of a national increase in Conservative support then it is possible that the losses they make in London will be made up for in gains elsewhere.

The probability of a Labour victory in Westminster and Wandsworth are low but it is more of a possibility now as London has been moving towards labour for a while now.

Philip Cowley, a political scientist at the Queen Mary university, said “A Tory victory parade in Wandsworth and Westminster, should they manage to hold them, will not be a sign of success but merely the avoidance of utter disaster.”

However, there are other boroughs in London that have also become battle grounds. Barnet, Sutton and Camden have had problems with management of waste.

Sutton had a particularly bad incident where rubbish wasn’t collected for 6-8 weeks, which ended up just piling up on locals’ streets, this could cause a Lib Dem stronghold to switch to the Tories, another cause for a swing towards Tory in Sutton is that Sutton voted mostly leave and leave voters will generally lean towards the Conservatives.

According to Lord Ashcroft polls people are most concerned about local health services (33%); Housing (30%), Crime (29%), Brexit (25%) and local council tax (23%). Brexit is particularly controversial in London because most voted remain and many blame the Tory government for the referendum and its result leading them to either vote Lib Dem or Labour.

Housing is another issue that is contentious because the supply of housing has failed to meet its demand causing prices to rise, according to an LSE paper on the subject “The UK housing system over-responds to economic downturns so housing investment is cut back rapidly, while it under-responds to increasing demand”. This means the housing supply simply doesn’t expand sufficiently causing high rents and prices and it is not simply a matter of producing more houses.

Council tax will be another issue that will be decisive as austerity cuts have put local government at “breaking point” according to the Chief Executive of the Local Government Information Unit (LGIU), Jonathan Carr-West. Not just that but 94% of council leaders say they intend to increase council tax, this could be very damaging for the current government and local government in general.