London transport services TFL have recently presented new upgrade proposals, which have recently been approved by mayor Sadiq Khan himself, the upgrades are said to make a vast improvement with the economy. Crossrail 2 as it has been called, expected to cost up to £27bn to install a new route from Clapham Junction to Wimbledon. The route is set to change that instead of running through Tooting Bec station, it will run through Balham instead. This is said to be able to support over 200,000 jobs and homes and boost the economy into the billions.

Another big change happening for the London Transport System is the addition to the Northern Line that is taking place. The northern line is expected to be extended to the following areas: Battersea Power Station, Kennington Green, Kennington Park, and Nine Elms. The construction started from spring 2015, 2017 the main tunnel work for Kennington Green/Park will begin. By 2020, the construction of the extension is said to be completed. With the extension, up to 25,000 new jobs and homes are supported.

LGBTQ History Month is a very important month for people to celebrate. It not only raises awareness for those who know nothing about LGBTQ people, but can provide some information for those who are members, or those that are discovering. Yes, the importance of LGBTQ History month is very real. And Omnibus tend to realise that as they are holding a series of LGBT events titled the ‘Unnatural Acts’, a series of, music, comedy and visual arts.

I had the pleasure of talking to Marc Wayland, a helpful volunteer who was working with Omnibus in the launch of the event.

Here are some of my favourite images from the visual arts station:

Activism has continuously proven to be an important part of today’s society, across the past few years, activism and protests have been a huge statement of the new age, from the black lives matter protest that took over Heathrow Airport in late 2016. And the Women’s March earlier this month (January 21st) in protest against the latest President, serial misogynist,  Donald Trump.

There is a great risk that peoples freedom of speech and right to protest is being tarnished, especially with the recent arrest of Shia LaBeouf who was arrested recently at his four year live stream protest to revolt against the presidency of Donald Trump.  He was arrested during the live stream on the 26th of January for allegedly ‘attacking’ a man who made the statement ‘Hitler did nothing wrong’ which offended Shia who is in fact Jewish.

However, the video clip shows LaBeouf shoving the man. Shia was then arrested and the hashtag #FreeShia began trending on twitter shortly after. People were outraged and began to express their rage through twitter:

This incident enforces the need for activism, especially the recent Trump presidency as there has been an uproar on the recent immigrant ban that has been enforced in the USA. Innocent people from ‘selected’ countries trying to return to the US have been held up or banned completely from re-entering the country. Yet people are banding together all over to try and put a stop to this with emergency demonstrations organised including today (30th January 2017) outside Downing Street.

Now Christmas in Japan is something very interesting, as Christmas isn’t even seen as a holiday in japan properly, so schools and jobs remain open through the holiday. Even though Christmas only became a thing in Japan within the last decade, Japan have a traditional Japanese cake, a plain sponge topped with whipped cream and strawberries, mmm! Christmas dinner in Japan is celebrated with Fried Chicken; places like KFC often take orders for Christmas dinners in Japan. Weird!

Christmas in India is similar to the regular Christmas that you and I are used to, except they have a little twist. Instead of using a traditional Christmas tree, people would use a mango or a banana tree to sample as a Christmas tree. In the Indian Christmas tradition, Santa Clause delivers presents on a horse and cart rather than a sleigh. Santa Clause is often referred to as ‘Christmas Thaathaa’ in Tamil. 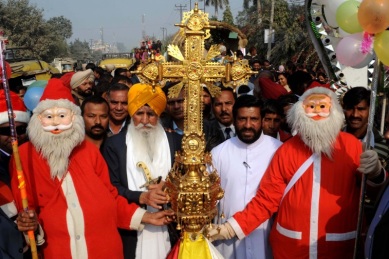 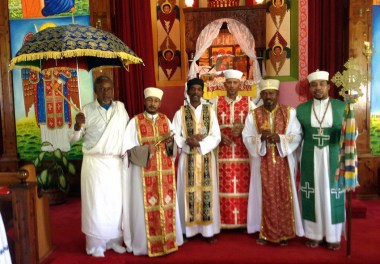 These Clapham Christmas lights are surely an event to look forward to, with a parade, a live band, and fire breathers, it is literally going to be lit!

Feasts winter lights event is set to be an excellent event to get the local community involved in. Taking place in St Luke’s Church, West Norwood, there is said to be a Christmas gift market happening inside the actual church where local artists and makers will be able to show case their creations. Perfect community spirit!