11:00       The team are here at the oval, not for cricket but the count of the local elections. We’ll have all the results for you as it happens.

11:04       Coldharbour Ward coming up for results shortly, will it be a surprise for candidate. Will the new Independent Rachel Heywood former Labour Councillor surprise everyone by keeping her seat as an Independent or will she be ousted by another candidate. Lets wait and see result soon to go live.

11:33   Really good to see groups of school children being taken round the count seeing democracy in action. Word on the floor is the Greens are hopeful with one candidate saying “it’s looking good”.

11:38   Labour chief whip, Paul Gadsby and Councillor for Vassall ward, told us that’s he’s been working very hard over the last few day. Nez caught up with on the count floor about how the campaign has gone.

12.33 It gone a little quieting now in the counts room, but many candidates are still looking apprehensive as they wait for results. 17 wards verified and counts started, so now awaiting final result.

12.49 We are looking to have the first two results for Bishop and Streatham Hill ward shortly after 1pm.

13.04 Streatham Hill candidate being called forward, results should be out soon.

13.11 Fresh news St Leonard’s ward in Streatham was a target ward in last night election, so another one to watch at result time.

Above link to interview with Adrian Audsley of the Green Party from Thornton ward, same ward as Lib Peck Labour leader.

13.38 Thornton ward which is the leader Lib Peck ward result should be coming soon.

14.05 Just got an interview with Cllr Rachel Heywoode former Labour Cllr now standing as an independent in Coldharbour ward. Link to interview will follow shortly. 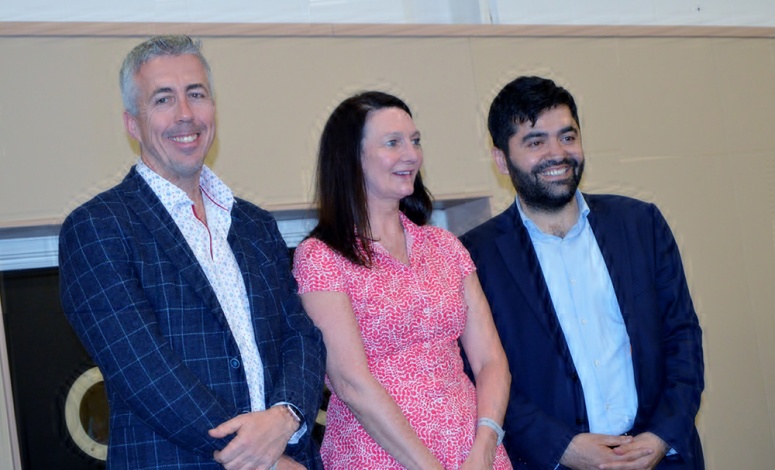 14.33 Link to interview with Cllr Rachel Heywoode who is ran as  an Independent candidate for Coldharbour ward at last night’s elections.

14.52 Larkhall ward result should be out soon.

15.17  Labour holds onto Larkhall ward with Christina Valcarcel having a whopping 063 votes, followed by Andy Wilson with 1,893 and new candidate Tim Windle with 1,751 votes. link to interviews to follow.

16.37 Streatham Hill ward result coming should be with you in a few minutes.

17:02 Green Party steal seat from Labour in Gypsy Hill. Greens fought a hard campaign promising to champion the concerns of those living on the Central Hill Estate. More to come as we get it.

17:04  Princes Ward is held by Labour. Still to come Clapham Common, the home of Lambeth College, will it stay Conservatives or will Labour make up their lost seat?

17.13 Labour keeps their seats in Vassall ward. This is the ward of Cllr Paul Gadsby the Labour Chief Whip and the MBE Cllr Jacqui Dyer and Cllr Annie Gallop have beaten off the opposition to keep all 3 seat Labour once again.

17.17 Breaking News – Full recounts order for Clapham Common, word on the floor Conservative may have loss a seat, hence my prediction earlier on target wards. 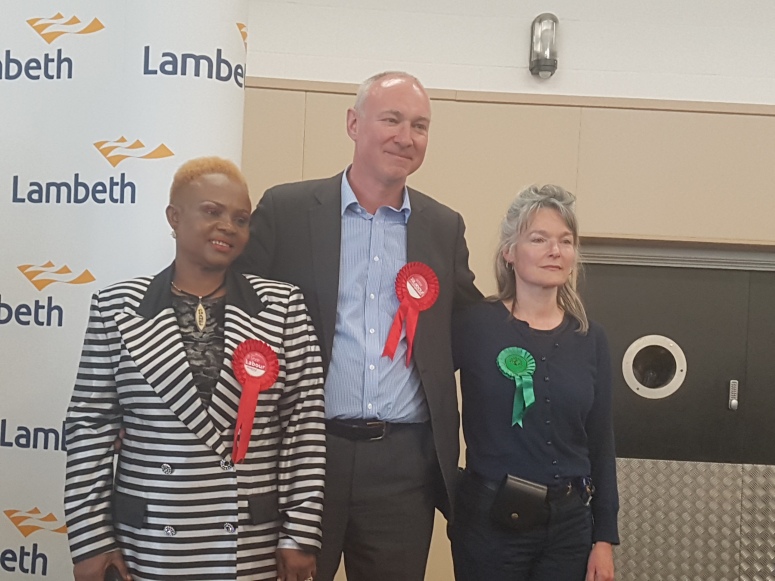 17.34 Thurlow Park ward Labour holds onto their 3 seats to keep the ward Red.

17.39 Five wards left for the counts Brixton Hill, Clapham Common, Streatham Wells, St Leonards, and Streatham Wells. St Leondards is being announced now. Greens already have a seat here and have held it.

17:42 A Green sweep in St Leonard’s. Green Party will be the official opposition of Lambeth Labour in the new Council. Labour lost their their 2 seats to give Green Party all 3 seats.

17.49 Brixton Hill results up next in a few minutes.

18.05 Tulse Hill results coming up, will be interested see results due to the Cressingham Gardens being a hot issue with locals.

18.14 Last results to come in from Clapham Common recounts. Nail biting time for all the candidate as we await the final counts for the Lambeth Local Elections

18.47 Final results just in and Labour has regained 2 seats from the Conservative who are left with 1 seat for Tim Briggs.

19.01 At last the count have been completed and everyone rushed out to the pub or home.  Labour lost 1 seat, Greens gained 2 seats and Conservative lost 2 seats.

It being great day thank you all for logging.

Hunt gave them a one-month deadline to report on what will be done to protect the children. Minister of Culture, Media and Sports Matthew Hancock, is considering tightening the legislation.

It is morally wrong for companies to do nothing about this when thousands of users breach the terms and conditions, and secondary effects on children are not taken into account.

The President of the Royal College of Psychiatrists in the United Kingdom, Wendy Burn, agreed with the Minister when she considered that “the self-regulation” of social networks in this area “has failed”.

For his part, Facebook’s policy director, Karim Palant, said that he “Welcomes the commitment of the Minister of Health” and assured that “he shares his ambition to create a safe and supportive environment for young people “online”.

“If we can not trust their policies, we must take action and not hesitate to toughen the law,” said Hancock

On this week’s Vox Extra Jessica talk with #PeterTatchell #LGBT, John meets with the guys from #PoeticUnity. Maame talks slimming sausages and Amirah discussed the need for #housingbenefits for 16-18 year olds in the Capital.

Slightly later than planned, this edition of #VoxExtra has a report on use of mobile phones usage in cars, the impact on #brixit on employment in the UK, introduction of #NHS chargers for Non-UK citizens and we chat with 2 outreach workers for ‘#LondonCityMission on their role in supporting the #homeless on the streets of #London. Oh yeah and those #Beyonce pictures get a mention as well.

Like Loading...
February 21, 2017March 6, 2017 by Sheila Smith - Senior Editor
This week Maame gives a profile of one teenager who was made #homeless and talks with one of #Lambeth College’s safeguarding officers about support at the college. John looks into child #obesity and the importance of your 5 a day. The team also discuss is it right to bring politics into #awardspeeches?

Welcome back to our regular Vox Extra programme. This week the team chat to some of the business leaders coming to a special breakfast at the Lambeth College. We look back on Obama’s time in the Whitehouse and what you thought of this 8 years in power as well as debating the women’s march the day after Donald Trump took office. We also talk to buggy bus users about how the high court decision to give wheelie chair users affect them. Steven marks the 75th anniversary of Desert Island Discs and Ramon talks football.