Sudesh Amman was shot dead by armed police for a terror attack in Streatham South london on Sunday. He had shortly been released from his previous 3… END_OF_DOCUMENT_TOKEN_TO_BE_REPLACED

US President Donald Trump impeachment trial will begin next Tuesday January 21st after articles of impeachment were formally delivered to the Senate. The President was charged with… END_OF_DOCUMENT_TOKEN_TO_BE_REPLACED

The company announced online issuing a plea to help those in need on December 24th by handing out free food. The Aldi company said they wanted to… END_OF_DOCUMENT_TOKEN_TO_BE_REPLACED 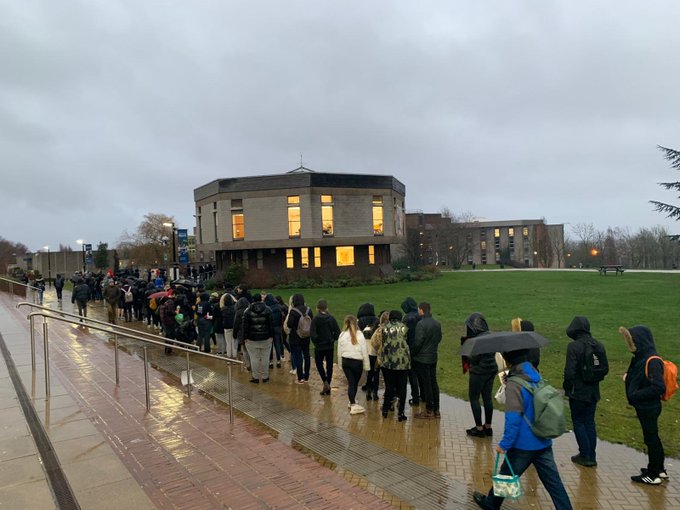 Lambeth now has two black female MPS for Streatham and Vauxhall held by Florence Eshalomi and Bell Ribeiro-Addy and adding Helen Hayes these three women are bound to be a force to be reckoned with.

This the first time there has been a all female constituency. Across Lambeth and Wandsworth are represented by six labour women.  Here are some opinions from what the general public had to say about the representation for black women and women in general

Taking some comfort from the fact that #Lambeth is now represented by 3 incredible @LambethLabour women. Huge congratulations to my new #Vauxhall MP @FloEshalomi who is a real force we of nature & I’m so glad she’ll be representing us in what is going to be a v tough time #SE11 pic.twitter.com/X7jlTrXzWW

In the hours leading up to the final results Vox Radio Correspondents had the pleasure of  being live at the constituencies across the London boroughs, Lambeth, Dulwich and West Norwood, Streatham and Vauxhall.

With the Results of the General Election last night ending up with a conservatives win it leads us to believe that there are a lot of things listed in their manifesto’s that may not happen weather these results benefit the UK we will have to wait and see.

From the manifesto released a few weeks ago it is clear that the impact it will have on the lambeth borough will be catastrophic the hit the NHS will take will the worst it’s seen in years and now eventually the rule to pay for all healthcare access will kick in families will be distraught.

The unidentified resident is said to have been waiting ’46 years’ for a new council property. Housing shortages in Lambeth are leaving 30,000 people in the borough,… END_OF_DOCUMENT_TOKEN_TO_BE_REPLACED

The Green Party’s co-leader Jonathan Bartley is running in the Lambeth Constituency of Dulwich and West Norwood. Mr Bartley is also a councillor for the St Leonard’s… END_OF_DOCUMENT_TOKEN_TO_BE_REPLACED

As the election date nears, it’s time to look at what each party has said it will do in their manifesto. This guide will cover the issues surrounding policing, crime, and security.

The Labour party wants to try and eliminate institutional bias against BAME employees within the police force and other public institutions. They also want to reform the way the police is funded. This is to make sure that sufficient and sustainable resources are fairly allocated across the force. As well as those, Labour also wants to work with police forces to help tackle the rise in violent crime and cybercrime that was seen under the Conservatives. Another key issue raised in the manifesto was that Labour wanted to ensure better training regarding domestic abuse and offenses arising from controlling behaviour. They also want to focus on historical abuse cases and other crimes that were neglected by the smaller forces under the Conservatives.

In regards to national security, Labour wants to take effective measures against a growing problem of extreme or violent radicalisation. They say they will ensure closer counter terrorism co-ordination between the police and the security services.

The Conservative party, like Labour, aims to increase resources for the police and introduce the Police Covenant to make sure they have the support they need. They also want to introduce tougher sentencing for the worst offenders and end automatic halfway release from prison for serious crimes. For child murderers, there will be life imprisonment without parole. The Tories also say with the new freedoms they will have after Brexit, they will prevent more foreign national offenders entering our country.

Another policy is to strengthen the National Crime Agency so it can threats faced from fraud, county lines gangs and child sexual abuse to illicit finance, modern slavery and people trafficking. They also say they will make 10,000 more prison places, with £2.75 billion committed to refurbishing and creating modern prisons.

The Tories say they will continue to fight crime against women and girls, including rape, Female Genital Mutilation and forced marriage. Their support for the main carer receiving Universal Credit will help give greater independence to individuals, most often women, trapped with coercive partners. They will also combat harassment and violence against all religious groups, and against LGBT people.

They pledge to make the UK the safest place in the world to be online, with the aim of protecting children from online abuse and harms, protecting the most vulnerable from accessing harmful content, and ensuring there is no safe space for terrorists to hide online but at the same time defending freedom of expression and in particular recognising and defending the invaluable role of a free press.

The Green party has said they will significantly reduce the number of short-term prison sentences handed out, replacing them with restorative justice projects that have a better record of preventing reoffending. They also say they will end the war on drugs, which has trapped hundreds of thousands of people into lives of crime and treat drug addiction as a health condition, not a crime.

The Greens also want to enhance the rehabilitation services on offer to long-term prisoners, commissioning rehabilitation services that have a track record of success. They will also support and develop a network of specialist women’s centres in order to reduce the female prison population. As well as these centers, they also want to invest  in youth services and centres, to help turn at-risk children away from crime and also invest in specialist programmes provided through youth centres.

The Liberal Democrats say they will invest £1 billion to restore community policing, enough for two new police officers in every ward, and introduce a target of one hour for handover of people suffering from mental health crisis from police to mental health services and support the police to achieve adequate levels of training in mental health response. They would also like to end the disproportionate use of Stop and Search.

Another aim is to properly resource the National Crime Agency to combat serious and organised crime, and tackle modern slavery and human trafficking.

The Brexit party only had three policies related to crime. They were to increase police numbers and have more visible policing, ensure focus on combating violent crime, robbery and burglary rather than enforcing restrictions on free speech. They also want to target the menace of County Lines drug dealers, gangs and the growth of knife crime.
The third policy was to abolish distortive targets and introduce sentence ‘ranges’ for young offenders, to encourage rehabilitation.

The five main parties in the general election have various policies on education. This is where I will set out what their main objectives are.   LABOUR– Their… END_OF_DOCUMENT_TOKEN_TO_BE_REPLACED

The UK’s main political parties have all began announcing their promises for the campaigns for the Election in December.

To help make the decision of choosing which party to vote fore here are what these five major parties are promising.

Use this article as a guide to compare where each party stands on key issues.

All the parties have launched their general election 2019 manifestos.

The Green Party have promised to create a humane immigration and asylum system for people to be able to seek legal advice, childcare and reintroduce legal aid for immigrants and finally end the indefinite detention of all refugees and asylum seekers.

The Labour Party have promised to have a flexible work visa system, protect the rights of  3 million EU citizens living in the UK the immigration system will be based on the needs of the economy and the communities they have also said they plan to end ALL deportation of families from people who’re entitled to be here in the UK.

The Conservatives have promised to reduce overall immigration to the UK after Brexit,  end freedom of movement to all EU citizens and introduce Australian points system, a student visa to help universities attract talented young people and allow those students to stay on apply for work here in the UK.

Brexit Party have promised to ensure that the UK maintains its commitments to NATO  and meets its commitment to spend 2% of GDP on defence as a minimum, crack down on illegal immigration and stop the human tragedy associated with human trafficking.

For more info on all the manifesto’ and their promises have a look below: